Born on October 30, 1945, in Abbots Langley, near Watford, Hertfordshire, Peter had lived in Exeter, Devon since 1967. His formative years were spent in South Oxhey from late February 1953, when the family moved into the large Police House at 314 Hayling Road. He attended Little Furze Junior School between March 1953 and July 1957, where he soon showed his ability at competitive games, including cricket and football. This continued at Clarendon Secondary School 1957-62, where he won games colours in athletics, basketball, cricket, football and rugby. He was also proficient at golf, judo and squash. As a strapping teenager, he liked to spend time practising his skills on the extensive South Oxhey Playing Fields, which had once been the famous Oxhey Golf Course (1912-52), in addition to earning pocket money as a caddy at the local golf clubs! Peter also gained useful part-time employment at the Busy Bee Café on the A41. His time at Clarendon culminated in his elevation to the position of School Captain (Head Boy), which he shared with his long-term friend, Pat Tavener (Head Girl). Before his transfer into the Sixth Form at Rickmansworth Grammar School in late 1962, Peter was presented with the Clarendon School Crest, in the form of a small wooden plaque, depicting the School’s Coat of Arms, which was based partly on those of the  Earl of Clarendon.

Apart from his successes at Clarendon, Peter gained selection for Watford Boys in athletics, cricket and football, and it was during his time at Rickmansworth GS that he was selected for the Hertfordshire County Colts Cricket team (Under 19). From 1962, he was also a member of Bushey Cricket Club, following in the footsteps of his elder brother, John.

Peter, not unexpectedly, had decided on a career as a teacher of Physical Education and in, September 1964, he began a course of training at Borough Road College, Isleworth, North London. All was well until that fateful night in mid-October 1965, when he suffered severe injuries in a tragic mis-judgement in the gymnasium, which resulted in a broken neck and total tetraplegia. He subsequently spent two years in the Spinal Injuries Unit at Stoke Mandeville Hospital, near Aylesbury in Buckinghamshire, before being transferred to Newcourt Hospital, Exeter, Devon. For a young man who had enjoyed using his impressive physique to marked effect over the previous decade, this accident came as a devastating shock, as it did to his extended family and to his many friends and contacts throughout the sporting world.

With encouragement from many sources, including medical and academic, Peter was persuaded to study for a Bachelor of Arts degree from the University of London, and he was presented with his award in the Royal Albert Hall, London, by the Queen Mother, in 1977. He had to achieve this goal by typing notes and essays using a rod held between his teeth! At this stage, he had hoped to undertake some legal training and become a solicitor.

After more than a decade in Newcourt Hospital and with his physical situation quite stable, albeit with a limited life expectancy of just 40 years, Peter had the good fortune to meet a local woman, Sylvia Vearncombe, who had been a nurse. They became friends and Peter’s life improved to the extent that he was now able to lead a more normal existence within the community, based in a home specially designed for the disabled, in Hamlin Gardens, Exeter. He was to spend the rest of his life with Sylvia, from 1980 until 2021.

Peter found his vocation in raising public awareness of all forms of disability, and in 1992 he founded a charity, Living Options Devon, which continues to flourish to this day! In December 1996, he was appointed Officer of the Order of the British Empire, and he proudly received his award at Buckingham Palace. Peter continued to work tirelessly well into his seventies in endeavouring to improve those lives affected by all aspects of mental and physical disability.

It  is a moving testament to all those people who helped him to achieve so much throughout a relatively long life: all the medical staff, doctors, surgeons, physiotherapists, counsellors, academics, key NHS staff, his numerous friends and contacts, not forgetting, of course, his friend and carer since 1980, Sylvia. At 75, he was to lead a full life only a couple of years short of the national average for male life expectancy. Amazing!

His funeral in Exeter in late July was attended by over 120 mourners, most of whom travelled out to Exeter Racecourse for “The Wake”, which was entirely appropriate, as Peter had taken up an interest in horse racing! Among the attendees, were several characters from his schooldays in South Oxhey, and following some introductory remarks by his elder brother, Bill Brindle and Mike Simpson followed on with some anecdotes from the past!

Although moving away from the area in 1965, Peter retained a strong interest in all matters relating to South Oxhey and he appreciated the publication of several papers and books on the estate, including David Reidy’s highly-acclaimed History of South Oxhey, “Poor But Proud”, 2012, and The History of Clarendon School in 2016.

We may have mixed in very different circles since 1955, but I still consider it an honour and a privilege to have known my younger brother over the past 75 years. 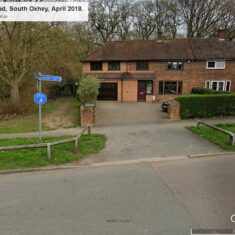 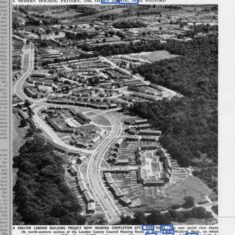 Hayling Road viewed from the west in September 1952.
Neil Hamilton 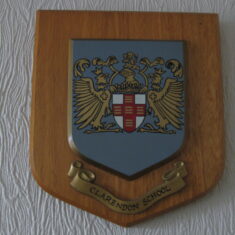 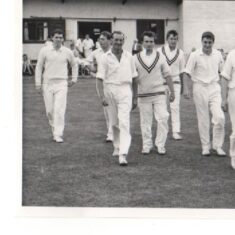 Bushey CC take the field on Sunday, August 16, 1964. John and Peter Swain are 4th and 5th from left.
Watford Observer 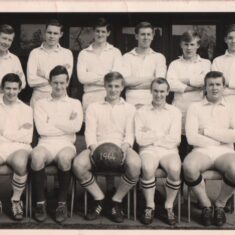 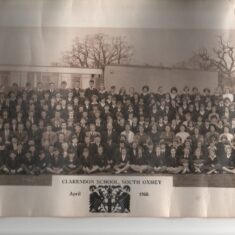 Peter Swain is on the back row as a 3rd former, aged 14 years.
John Swain Collection. 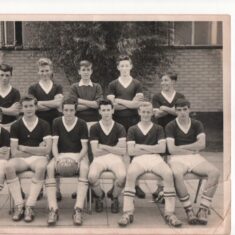 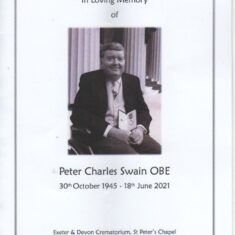 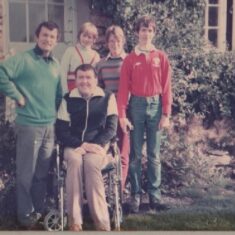