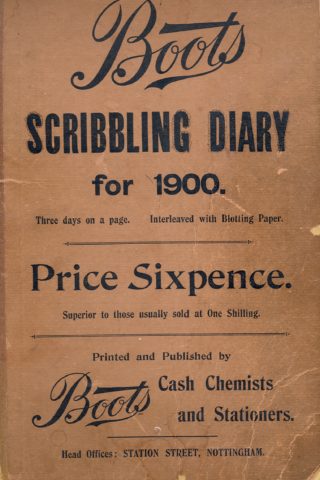 Another wet day and wind blowing very hard. I went up by the 8 o’clock and came home again by the 12.40. Too wet to go anywhere after dinner. I had a tune and did a little needlework. We had an early tea. It had cleared up a bit by that time and mother and I went up to Flo’s and then to Lil’s. I took Elsie for a little walk by the river but we had to hurry home again as it came on to rain fast.

Several heavy showers but the wind is not quite so rough. Stayed on till 8.30 but nothing much to note.

Fine all day and warmer, it is phrophesied that we are to have another heatwave. Stayed on till 8.30. Mother has been at Flo’s all day helping her to put straight.

Fine first thing but turned to rain afterwards. Will is having his holiday and has taken the two boys to London, he is going to take them for a ride on the water to Greenwich. So Mother and I are going to sleep at Lil’s to keep her company. I did not get down till 9.30 and then I went into Mrs Langstone’s to be fitted for a jacket she is making. Mother met me outside the station, it was rather late when we got to Lil’s.

A much brighter day but two or three heavy showers. Came home by the 8.35 and went straight up to Lil’s. Mother met me in King Street.

A beautiful day much warmer. I came home by the 5.40. Mother had not long been back from Lil’s. Will and the boys came home just before she came aawy. I had my tea and then did some work I had brought home with me till 8 o’clock then went to the prayer meeting. Afterwards called at Mrs Langstone’s for my jacket then came home and did some more work, went to bed tired out.

A most glorious day hardly a cloud in the sky all day. Mr Spufford is back again after his holiday. I did not get up in time for School this morning. Lily came to tea and two little girls who are staying at Mrs Elgraves named Miriam and Maude Rose. They seemed to enjoy themselves. I took them for a little walk after tea. There was an Open Air service in Vale Road after Chapel. I had to start the singing as it was too dark to have the instruments. My head has been bad all day but is better tonight. Rob and Tilly and all the youngsters and Mother and I went for a walk after the open air.