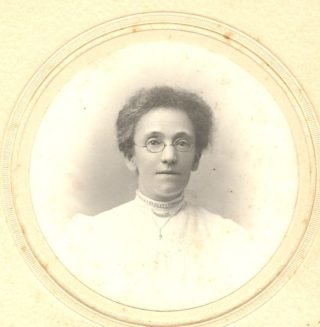 I have been laid up so must try to record from memory.  Was in bed all day. Tilly came up all day.  Dr came in the afternoon  and said I had influenza.  Mother still in bed.  Dr says she must not get up till after he has seen her on Thursday.  The weather is bitterly cold.  Had letter from Aunt Clara she is not well.  Mrs Bailey and Mr Spufford and Miss Mitchell called in to see how we were getting on.  Mr Spufford came upstairs and others did not.

Weather still freezing.  Our water tap froze in the night and would not run till afternoon.  I have not been in bed all day but part of. Tilly has been up here all day.

George Forfeit came this evening and brought some beef tea.   Mary came home at twenty past nine tonight.   Fred came and locked us in and took the key with him.   He is coming to light the fire in the morning.  Had a very cheerful letter from Flo she is much better, also a letter from Cousin Laurie.

Still freezing sharply.  Both Mother and I are better.  Fred came about 8 and lit the fire.  Mary came about 9 or just after and Tilly a little later.   Mrs Bailey came this morning and brought us custard and some lovely grapes.

A beautiful day, but freezing sharply all day.  Dr came this afternoon says I can go downstairs but be sure and not go outside and mother can get out of bed but not go downstairs, so she got up after tea.

Still very cold, everything still frozen.  Looks like snow.  I’m feeling better,  Mother not so well got such a sick turn, afraid to take anything to eat or drink.  She got up for a bit just before tea but was glad to get back again.  Mr Spufford came up to see us this afternoon.  Mary brought me the paper round and I tried to read about the War.  General Buller and a few others seem to be making a little progress, but very slow.  Eva Fawcett called this evening but did not come up as mother was so sick.

Thawed a little this mornng, came on to snow this evenng.  Mother seems better the sickness is gone.  We had several visitors today,Mrs Bailey, Miss Mitchell, Mrs Sam Nash and Maggie Gosling, she stayed and had a cup of tea.  Several of the girls in the office sent kind messages telling me not to worry about the work as it was going all right.

This has hardly seemed like Sunday not going out  at all.  It has been a been a beautiful fine day, but very cold strong wind blowing, it looked as though there would be sharp frost tonight.   We have had a very calm, peaceful day.  Mr Ludbrook and Johnnie called in after school and brought us a pot of jelly.  Miss Widsmore and Tilly took my class.