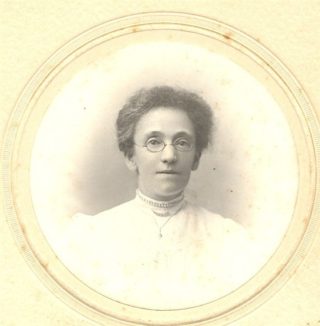 Weather dull today.  I went C.E. Committee Meeting this evening and then down to Lil’s to see if Amy was back and to hear the news from St. Albans. We had a letter last Friday from Flo saying how poorly she was, she thought she had got influenza.  Amy left her a bit better than she had found her still far from well,  baby Nell was not well either.  Lil is not at all well this last week or so has had to go to the Doctor, he says she is run down.

Pouring wet morning cleared off a bit later on in the day.  Mother went to St. Albans this morning to give Flo helping hand, is going to stay till tomorrow night.  I am going to sleep down at Lil’s tonight.  I went to the C.E. topic ‘In a Far Country’. Amy went for the last time for some time to come, as she is going to live with Mrs Beal at Bexhill-on-sea as a Mother’s help.

Another wet morning but fine afternoon and evening.  Hurried over my tea and then came home and changed my dress, and then went to sing at a meeting held in the Wesleyan Chapel,Vicarage Road, Watford.  A Social in connection with the Temperance Iron Side Circle.  Fred and Mary were up there and we call came home together.  Called in at Lil for Mother.  She was coming back from St. Albans and was going to wait there untilI came.  We stopped and had a bit of supper there.  I sang ‘In His Steps’ at the meeting.  I went to Cousin Clara Redding in the dinner hour today to tell her about Amy going away.

A nice fine bright day, rather windy.  Stayed on for an hour at work.  After tea helped Mother put down the front bedroom carpet and put up the bedstead in the back room, then wrote  a note to Maggie Gosling who is away from the office ill.  Then both Mother and I went down and posted it and called in at Robs, found Mr Spufford there, then on down to Lil’s for some things wanted, did not get back till half past ten.

A fine frosty morning, but changed to wind and rain in  the afternoon and evening.  Got home at 6 o’clock this evening, after tea I put up the pictures and ornaments in front bedroom, then did a little bit of work I had brought home.  At 8 o’clock went to the Pentecostal meeting, not many present but had a good time then home and  finished the work I had brought home.  Amy went to London this morning  by the 7-29 train to pay a round of visits and say farewell to them all.

A fine day but thick fog came on in the evening.  I got home at 2-30pm, had dinner and did a little more putting straight.  After tea I went to see Maggie Gosling, found her a little better hopes to come to business on Monday, but I don’t think she will. Got back in time for the prayer meeting.  Went home and studied the  SS lesson for tomorrow morning.

A fine morning but a soaking wet evening.  Mother, Amy and I went to tea at Mr S Nacho’s.  We had a nice bright prayer meeting after service tonight.  Amy went to Rob’s and Fred’s after Chapel to say goodbye as she goes to Bexhill tomorrow.