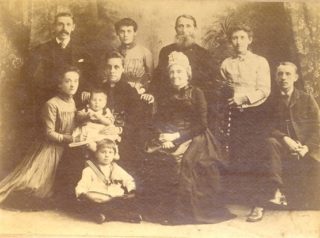 Another nice fine day, not quite as cold as yesterday.  I stayed on till 8-30 to try and get my work up straight.  Mother spent the afternoon and evening down at Tilly’s helping her with a dress and jacket she is making for Lily.

A dull morning but cleared up nice and fine afterwards, much warmer.  Got home at 6-30 brought some work home with me.  Did not go to C.E. this evening as my head was so bad.  I felt as tho I had got a bilious attack coming on so I just did the work I brought home with me and then went to bed.  My head has been very bad all day.  Mother has been at Tilly’s again today.

Dull all day, drizzling rain on and off very mild.  Did not get home till 7-30 had my tea and then went to teachers meeting.

A dull dreary day, raining nearly all the afternoon.  I stayed on till 7-30 as I knew Mother would be out till about 8 o’clock.  She has been up at Lil’s and Flo’s and also to see Mrs White of Harrods Road who she is going to nurse at the beginning of the month.

A little brighter today, colder again.  I got home at 6-30.  Went to Pentecostal League Meeting at 8 o’clock then went home and did some work I had brought home.

Heavy showers bright in between.  The City Imperial Volunteers or C.I.V. as they are called were expected back from Africa today and great preparations have been made for a grand procession to be followed by a banquet.  The streets were all decorated like they were at the Jubilee and after all they did not arrive in time.  The rough weather we have been having made the vessel late. Thousands of people disappointed.  Flo and Mary went up and met Fred and Charlie to go and see them.  Mother minded Flo’s youngsters.  I got home at 2-30 and went up to Gladstone Road. Stayed there to tea then went round to Lil’s for a little while.

A fine morning but came on to rain when we came out of School and kept on all the evening.  Mr Bruce of Pinner preached today. We commenced having our regular classes this afternoon.  Flo and Charlie were coming down to Fred’s to tea but it rained too fast.

Pretty fine a little rain in the middle of the day.  I took up a bonnet with me this morning that Mother had been trimming for Aunt Clara and she called at Gloucester Road for it in the dinner hour.  I walked to Camden Street with her, she is staying at Aunt Carrie’s for a few days.  I got home at 10 to 6.  Brought a bit of work home with me which I did after I had my tea.  I may not be able to write this book for some time as I am going to stay at Flo’s while Mother is at Harwoods Road.