Impact of the Great War 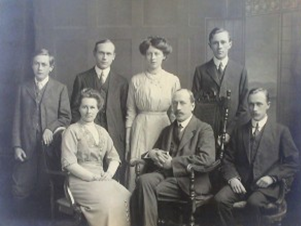 The Ibbott family lived at ‘Osborne Villa’, 57 Chalk Hill, Oxhey, a house high on the bankside on the corner of Villiers Road, which still stands today.

Arthur Pearson Ibbott was a secretary and accountant to an investment company and he established a small independent Baptist Chapel in Oxhey, where he became the superintendent. His daughter, Grace, was an art student and all his sons attended Watford Grammar School for Boys.

Arthur David Ibbott, the eldest son, enlisted as Private 26046 with the Bedfordshires, later transferring to the Loyal North Lancashire Regiment. He was killed in action on 3 September 1916, aged 25.

His younger brother, Bertram Charles Ibbott, joined the Machine Gun Corps as Private 85380 and died of wounds on 16 July 1917, aged 21.