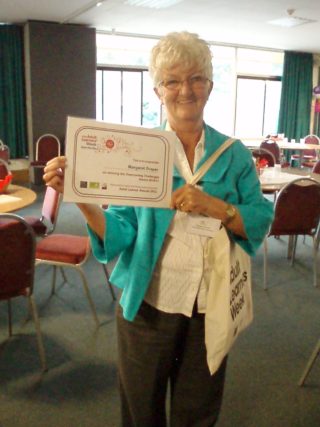 Margaret with her award
by Beverley Small 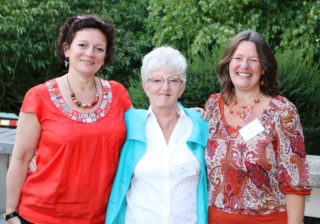 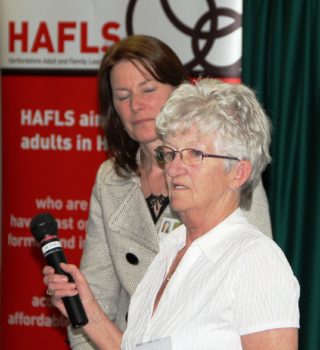 The HAFLS Adult Learners Week award for Overcoming Challenges 2010/11 was won by Margaret Draper, who has lived in Carpenders Park for many years.

Margaret wanted to improve her computer skills so that she could keep in touch with her daughter when she emigrated to Australia.  She went to Oxhey Library and booked to do the taster sessions there.  Margaret completed 4 sessions at the library with Learning Support Officer Liz as her tutor

Once she had completed the course, Liz advised her to continue her learning at ASCEND and she has gone on to do various courses there, including literacy.  Here is Margaret talking about her journey.

Margaret joined the Oxhey Quick Reads Book Group, which meets at Oxhey Library or ASCEND and took part in the Six Book Challenge.  She now regularly reads, does crosswords and keeps in touch with her daughter via her computer.  Margaret has overcome many challenges since she first came to Oxhey Library and is now a keen reader who is looking for new learning challenges.

Margaret’s award was presented to her at County Hall in May 2011.  She was nominated for a HAFLS Adult Learners Week Award by Liz, her tutor at Oxhey Library and Beverley, Lifelong Learning Librarian for Watford and Three Rivers who think she is a deserved winner.  They were there to support her at the awards ceremony, as were her tutor Michele and others from ASCEND.  Despite being very nervous, Margaret stood up and spoke about what winning this award means to her.  Margaret is an inspiration to others to start learning as an adult

Well done Margaret, you are a real winner!