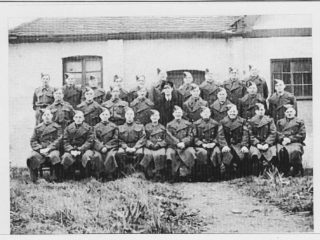 Soldiers by the barn
Arthur Hall 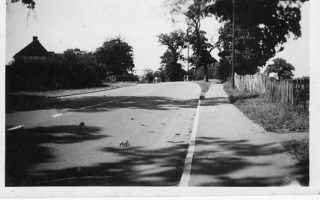 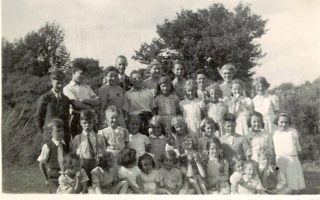 These Photos were intended to accompany my comments with the ‘New Methodist Church – Prestwick Road’ However, I was unable to attach them.The picture of a group of soldiers, was taken in front of the entrance to ‘The Barn’ which was our local community centre. This picture is the only picture that I have been able to find of ‘The Barn’.

For the record, as you entered through the old door you stepped into a hallway with a brick screen in front of you, attached to which was a wooden notice board containing information about various events that would be happening, i,e, Whist drives, Dances, Library, shows etc., From the hallway, which had entry to both right & left, you arrived into the main hall, at the end was a large stage. The ‘Barn’ had a Billiard Room next to the stage, which was used as a changing room when there were stage productions, mainly by ‘The Barn Stormers’ a group run by a Mrs Dixon. The show that I can remember was a musical called ‘London Pride’ with the theme music from ‘In Town To-night’.

At the rear of the main hall, near the entrance was another small hall to the left which was the ‘Table Tennis’ room’ and was also the library. It was this room that became the Methodist Church in 1944, and where we started to go to Sunday School.

I can appreciate the reason for there being no pictures of ‘The Barn’ as it was not very photogenic from the outside. It was what went on inside that mattered !.The photo of Oxhey Lane is to give an idea of the ‘Barns’ location. At the bottom right hand corner you may see a little turning in the footpath, that was the path leading to the entrance. In the top left is ‘Tudor House’ with a path at the side leading to Greenfield Ave.

The 3rd Photo is of St Meryls first Methodist Sunday school outing to Kings Langley. I hope that the foregoing will stir a few memories.

Seeing these pictures reminded me that both my Brother Jim, myself & friends, were probably the first to attend the original Methodist Church, held in The ‘Old Barn’ in Oxhey Lane, St Meryls Estate about 1944. It was a small extension of Bushey & Oxhey Methodist Church, & was run by Mr & Mrs Field of Greenfield Ave, & a Mr John Cook who lived in the Court Way. Our first Sunday School Outing was to Kings Langley on a No. 302 Bus from Watford Heath. It was a very hot day as I can remember us drinking strawberry jelly, as it refused to set. I have posted a photo of that outing, just in case there is anyone out there who may still recognise themselves. Left in the back row is Mr Field, end right is Mrs Field, 2nd Row from left to right rear, is Myself, Arthur Hall, Raymond Brooks, Jean Morgan, Rex Gower, I cannot remember the remainder, 3rd row from rear Left to right is Brian Burgess, & my Brother Jim. Old age has blotted from my memory the remainder. The new church certainly makes our Old Barn, look like a Barn, it did however have a very warm heart.