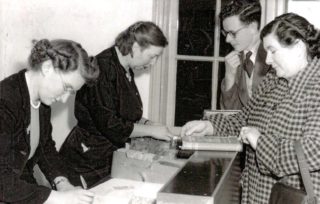 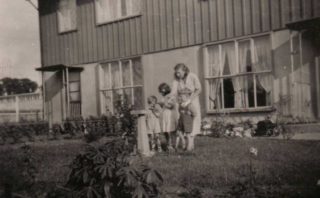 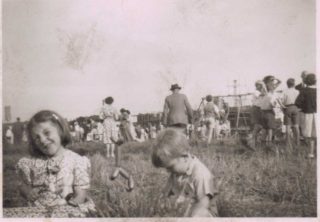 I was brought up on the South Oxhey Estate.  We lived next door to the Library at 62 Little Oxhey Lane.  My mother’s name was Iris Bew and she was the senior assistant at the library for twenty five years, along side Olive Roberts.  Iris was known as the ‘Library Lady’.  The library opened in June 1951 and had originally been a farmhouse and remained there until a new one was opened in Bridlington Road in May 1962.  The old library was a two-up and two-down building with a little outhouse for personal use and a little hot plate on which to heat a kettle.  The upright paraffin heaters were the only form of heating.

The Junior library was upstairs and there was only lino – the old fashioned brown thick type – on the floor.  The building was whitewashed at the front and there was natural brick at the sides and rear.   The roof was made of slate.

The back yard was not used by the library but was rented to a Mr Waller who lived in Lytham Avenue.  He kept chickens in the cobbled yard  in old-fashioned chicken runs.

There were a couple of bulls when I was very young.  They used to be attached by rings to the back wall of the library.  I think the farmer was a Mr Twizzle.   A cattle bridge led  to the field.  It was not unusual to open the back door and see a cow looking in!  Cows used to wander in and tread down the chicken wire.

The community swimming pool now stands on the site.

My parents were among the first on the estate in 1948 so we saw the whole estate being built.

A cottage stood opposite the old farmhouse but it was pulled down and a block of warden controlled flats for old people were later built on the site.  I remember a well in the cottage garden.  It was boarded over and as children we used to jump on it, unaware of the danger.  The land was unused for a long time until Woodhall School was built there in 1954.

1.   Photographs show my mother Iris Bew in the  original Library with Olive Roberts

2.   My mother and us children in the front garden of 62 Little Oxhey Lane.  You can just see the Hampden School building to the left.

3.   Myself with brother Christopher at the first ‘Fun Fair’ to be held on the estate.