You are here: Home>Places>Oxhey Place>Four Hundred Year of Oxhey Place 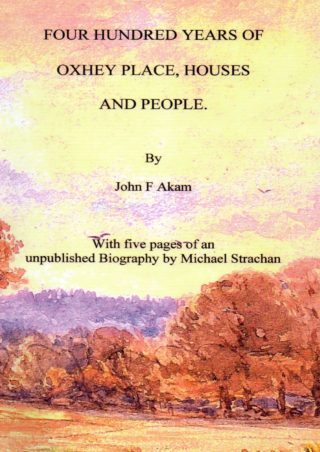 A new illustrated book on Oxhey was published in 2011.

The story of Blackwell’s Oxhey Place near Watford Hertfordshire, this was formally known as Sinklees and now South Oxhey. The book is written by John F Akam, son and grand son of staff at Oxhey place, with five pages taken from an unpublished Biography by Michael Strachan.

The book goes back to before the time of Sir James Altham, he was the first person to build a mansion house at Sinklees and about the same time he built the chapel. Not everyone who purchased this private estate or manor wanted it for their home; and over the centuries a lot of asset stripping was done. Sir John Bucknall in 1690 after completing his large square house in the style of ‘Syon Park’, re named Sinklees to Oxhey Place. It’s a good read, but I am biased, if you wish to delve into history before South Oxhey was built, you will probably find it informative.

It seems incredulous that one finishes a book to be invited to a funeral of one of the people in the book. I refer to the death of Mrs Pamela C Fairbrother (Judd) 1927-2011, who was one of the four remaining people alive who lived at Oxhey Place, her father was head gardener and is buried with his wife outside Oxhey Chapel. The Service of thanksgiving was Monday 14th February 2011 at a very quiet Crematorium in Bournemouth. A large gathering of the ever expanding Judd family attended, I was honoured to join them, and now immortalised in their photos.

Always after a book printing has taken place, one finds little inaccuracies, some are shall we say foreign words, however page 78 is just incorrect relating to the photographer attribution. I knew there was a concerted effort for Pamela and Laurie Fairbrother, to visit Mrs Betty Blackwell at her home in Foxham Wiltshire, I have since learnt that the late Frank Judd, brother to Pamela and Melva his wife were also in the party, this was sometime before Betty Blackwell’s death, in the year 2000. The visit also included Arthur (Wag) Bowerman, who many of you knew and loved, he was at the time ‘Oxhey Chapel’s Custodian’. At this visit to Foxham and possibly Oxhey Chapel at another time, several photographs were taken by Frank Judd. I am indebted to Melva and Dominic Judd nephew to Pamela, in helping me to make this correction. So you see, although I had permission to use the photos from Pam and Laurie Fairbrother, I was not advised who was the photographer. Therefore one must not assume anything when putting it down in writing.

A small number of copies are available by collection from South Oxhey Library at £7.00 each, or for the UK direct from the author signed, for £9.24 this includes postage & packing. To order from other parts of the World please send your email to johnfakam@talktalk.net or write to ‘Dream Solutions, 10, Apple Tree Road, Alderholt, Fordingbridge, Hampshire, SP6 3EW, UK’. Please make any cheques payable in Sterling to ‘John F Akam’ direct money transfer is available.

I wish to thank Three Rivers District Council, and the South Oxhey Library including the team of editors of ‘Our Oxhey web site’ for their help in this promotion.