The 20s Revisited - Don and Letty Bennell's Memories of a childhood in the 1920s evoked many memories for another Oxhey Village resident. 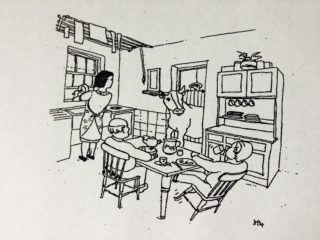 Being surprised by the cow at the back door!
Illustration by Ian Mackay

Oh what memories Don and Letty Bennell’s letter brought back!

I was Villiers Road born, next door to the Villiers Arms, my parents were also born in the road.  I too, was a playmate of theirs and can recall all they said about Dr Doyle, who lived at 175 Pinner Road.

The girl who lived next door to us worked for him and told us he had spent most of his life in India.  He was a most dignified gentleman, he wore a grey Melton cloth overcoat, grey suit, grey Homburg hat, spats and he carried a silver knobbed walking stick.  He had a white military-type moustache, and a lovely smile for us local children who sprang from nowhere on his appearance at the Watkins Sweet Shop – hoping for our usual Saturday Penny.

No. 97 Villiers Road, (now Paddock End Stores) was Jackman’s Shop then.  Meat was sold on the left counter of the shop and groceries on the right.  Milk was around the back, in the dairy – or you could have it delivered daily by the horse and cart.  Old Mr Jackman, and his son George, were in the shop, his other son, Alfred, did the milk round.

In the front of the grocery counter stood sacks of butter beans,, prunes and figs – a temptation for little finger, but the fruit was hairy fro the sacks and deterred one from sampling.

On one Sunday evening every month during the summer, the Jackmans would have a little service outside their shop.  A harmonium was wheeled out and old Mr Jackman would sit and play.  His son, George, and his wife, and some other members of his church, would sing hymns – mostly Sankey, Moody and Wesley they were regular Methodists.  Sometimes we local children would join the group and sing with them.  My Grandmother, who lived with us, loved these evenings, and my father would place her chair by the open front door so she could enjoy it.

On market day, cows and sheep would be driven up Villiers Road into Pinner Road, and thus to Smith’s Farm at Watford Heath.

I remember one, when we were children, sitting around the table having our midday meal with the back door open and being surprised by a cow looking in at us.  It had run up our alley, but was soon chased down again by the cowman in charge.

Times were hard for our parents in the late twenties and early thirties, but we youngsters spent a carefree childhood.  Our games were played in the street skipping, whip and top, tracking, etc.  We could picnic with bread-and-jam and a bottle of water up in the hayfields, or pick bluebells from sand pit woods (now the South Oxhey housing estate), and, in the autumn, blackberries – fro the same woods.

I am sure we youngsters considered summertime and sunshine to be endless.

We had very little compared with today’s children, but we had to make our own enjoyment, and I can’t recall being discontented.  Sad to say the children of today can’t enjoy the freedom which we had in the streets and filed, so in retrospect we were indeed fortunate!

At the time of writing, in April 1994, Doreen Doe still lived in Villiers Road and was a member of the Oxhey Village Environment Group.  The Group thanked her for allowing them to publish her memories.