A love of fine music 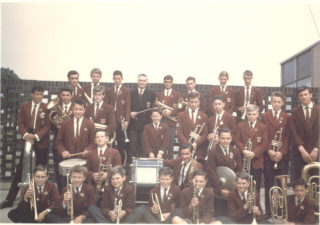 This picture is a wonderful colour photo of part of the band. Unfortunately, I can only remember a few of the faces.  The only ones I can name are Steve Coltrini holding his sticks behind the snare drum, I recognize the trombonist next to him but cannot for the life of me think of his surname (though I think his first name is John). ditto the wee fella behind the base drum and the trumpet player next to him. Next to him is Bob (Whitby?) who became our deputy band leader and on his left the blond chappie looking decidedly stern is Neil Percival who became band leader. Both Bob and Neil were virtuoso trumpet players and it was my pleasure to sit behind them in the seconds and be blown away by the mastery of their instruments.

Memory serves me a little better in the front row. On the extreme left is the be-spectacled Bryan Backman who I was in contact with some years ago and actually sent me this photo. Cannot name curley blond lad but next to him is the cheeky phisog of John Booth who was my mate at the time and enticed me to join when we were in third form. The lad in front of the base drum looks bit like me but if it is earlier than ’62 then it can’t be. I do know that I owned a cornet rather than a  trumpet and my wife reckons it is me but I don’t recall the photo being taken and the fellows in the front row look a lot younger than the 14 years we were when I joined.

The next three guys are familiar to me but again cannot name them.

I am indebted to our wonderful band master, the late Roger Elliott, for the best three years of my school life and for developing in me a love of fine music.