My First Day at Clarendon School 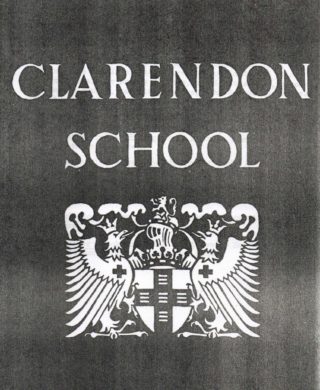 My first day at Clarendon School (1955) was a real eye opener. Like all children changing school you go from being an older pupil back to being the youngest again.

Clarendon School was made up of several blocks, when I started there were five (more were added later). My classroom was in Capel Block and we had to walk (regardless of weather) between the blocks for various lessons. All the school would go to the main Clarendon Block for assembly in the morning. It was lining up on the first morning that I slipped (New Term = New Shoes = Slippery Soles) and fell flat on my face. After a brief scuffling in the line it was established that I was OK and we filed into the hall.

I don‘t remember visiting the school before I actually started there and I could not believe the sight of that school hall. It had a beautiful light wood, highly polished floor. The brickwork was a light grey brick and there was a staircase one end that came down from a balcony which went around three sides of the hall, the staircase had a platform half way down where the Head would stand and speak from. One end was a large stage with deep burgundy curtains and on these curtains were appliqué embroidered full length figures of the name sakes of the various ‘Blocks’ Capel – Carpender – Morison – Altham. The biggest surprise was that the whole school sat on chairs, where as at primary school we sat on the floor in the hall. These chairs were arranged to face inwards to the main aisle and were grouped in blocks for the individual classes.

When the stage curtains opened the Clarendon School Brass Band were on the stage, it was so impressive with almost the whole school in uniform it was a sight I have never forgotten and sealed my pride in Clarendon School from Day 1.

I was even more impressed when we all had to stand and the staff and prefects came in and sat around the balcony, which was adorned with ’House Shields’. Then the Head walked down the stairs and took his place. Mr LW Stewart was the Headmaster, he was a very tall man and looked very distinguished in his black gown. The Deputy Head was Miss Tanner and she also wore a black gown and a Mortar Board, which many of us had never seen anyone wearing one before.