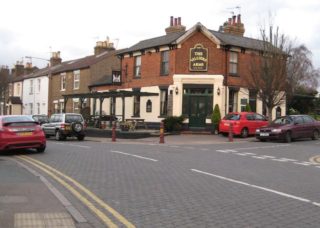 If you had gone further up on this side Lovedays is on the corner there. On the opposite corner was Palmers which was the other beautiful delicatessen place where you went and they cut all the cheeses and the hams and everything like that [off the bone] all beautifully off the bone, all cooked on the premises as well [lovely]. And then further up the road was um Hockers which was a little shop and they used to have big double freezer which always had sweat peas on there and she let you sit on it as a child and they gave you bread and things like that.

[I was talking to someone earlier today and she was saying that there is a greengrocers that is setting up a little stall] Brown’s, Brown’s from Bushey, who use to do Brown’s who were in Bushey, the big greengrocers in Bushey High Street and in the market he now supplies people wholesale and he’s doing it on a Saturday morning outside Lovedays. As a child Lovedays used to be the only bakers in the areas, and you used to queue on Good Friday and you used to get your hot crossed buns and he only cooked them Friday, on the Good Friday and you queued in the morning to get them. And in the bread shortage, you know when there was that big bread shortage, he used to sell doe to us all. Shrewd man [laugh].