You are here: Home>Places>Shops and Shopping>Shopping in Pinner Road, Oxhey Village 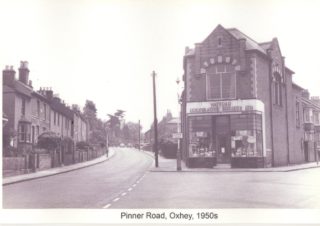 In Pinner Road, where you have the picture of the Watford Co-operative Society, years ago in the 19, er, late 1940s and 50s above the co-op was the Co-op Village Hall that had, um, weddings and functions , and um, a friend of mine in the 1960s remembers going to like a church meeting,  um above there, and its now been converted into a beautiful two bedroom flat and I recently had to rent somewhere temporarily with my neighbour and we lived there for six months and the basement, the shop now is HairTech  and there’s the basement   which was obviously the store for the co-op. [I bet it must be lovely and bright] oh it’s huge, high ceilings, absolutely beautiful.  And that’s where the stage was, that was the stage ran along the front there. And behind the stage was the large window and the original staircase is there so when you go in the door which is along the side here you go in the door and up the stairs is the original staircase and [……..] the original banister is still there and this widow’s still there , this one here [on the right-hand side of the picture] that big one, but now there’s windows  here, they’ve put windows in there either side this window here is still that shape it’s a great big window, but, um [great fun] no, actually that window is still that’s the window at the side, because you go in just there, [near the bus stop] oh was there a bus stop [there was in the photograph anyway] oh goodness, there is just a sign now for Oxhey Village.

Thanks to Francis Frith for permission to reproduce the photograph