You are here: Home>Places>Shops and Shopping>Starting Work In South Oxhey 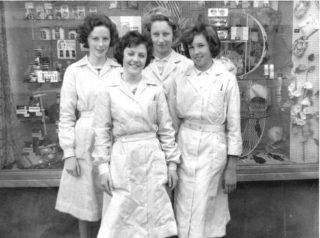 Approaching 16 years old I found myself working in South Oxhey in St Andrew’s Road at ‘Boots The Chemist’. St Andrew’s Road was then a through road with wide pavements on both sides. ‘Boots The Chemist’ (Never called just ‘Boots’ in those days.) was sandwiched between ‘Sainsbury’s’ on one side and ‘Lipton’s’ another grocers, on the other. The Co-op was where it is today but had its own chemist shop in the small shop that is now the undertakers.

I cannot remember what was next to that (now a greengrocers). Then there was a bakers, which later became a wool shop, before becoming a men’s clothing shop and then a charity shop and now an off licence. On the end of the block was ‘Giles’ the electrical shop which later became ‘ The Sports Shop’ and is now another Chemist.

Next to ‘Sainsbury’s’ was a wet fish shop and then ‘Melody Corner, a record shop. Next to that was another bakers and then the corner was taken up with ‘Gilmore’s’ the gents outfitters.

When I started at ‘Boots The Chemist’ it was not a self service store, it had counters all around the outside of the shop, arranged from the left as Photography, Chemist Counter, Pharmacy ( with its huge coloured glass bottles on the shelf in front). Then came the Surgical Department, the Toiletry and Cosmetics. In the centre of the shop was a large island which the assistants stood in the middle of and this contained soaps, shampoos, face cloths and at Christmas the ‘Coffrets’ = Gift Boxes, and best of all a gas radiator which was wonderful  as it was a very cold shop and most of the girls suffered from chilblains in the winter.

There was a little room at the back of the Surgical counter with a couch in for measuring and fitting of surgical stockings and trusses.

I was to start in the Surgical Department as ‘Surgical Junior’ under the care of Mrs Anne White, the ‘Surgical Senior’ who seemed at that time a very strict and stern lady, but when I got to know her she was extremely kind to me.   She was involved with the Civil Defence which had its base next to the Police Station in Oxhey Drive, it had rooms there and garages to house its ambulance and equipment.

(This was the building used as a temporary home for the South Oxhey Library while it was being rebuilt in 2009, although the garages have long gone, it was also used by Social Services for some years and in 2011 is the home for ‘Step Up’).

Monday mornings was cleaning time at ‘Boots The Chemist’ and all the counters had to be refilled, cleaned and tidied. The compartments on the counters were heavy glass, fixed with metal clips and these glass partitions had to be taken out and cleaned with methylated spirit and put back with the new stock, which in my case was bandages, baby food, plasters, and a wide assortment of things that at that time I had no idea what they were used for! But I soon learned! Some of the items the younger girls were NOT ALLOWED to sell (this according to the ‘Boots The Chemist’s’ regulations was to avoid embarrassment ) and we had to send the customer to either Mrs White, the Surgical Senior or to the Manager, Mr Widdas, who was nearly always dressed in pinstripe trousers and black jacket.

It was most enjoyable serving the young Mum’s who came in with their large prams that took up most of the counter front and we got to know all the babies and watched them grow up. Many of those young Mum’s still live on the estate and it makes you realise how time goes when they tell that their eldest is now 50 years old! And we still talk about how wonderful the pram was that she had then. A real museum piece today but she was so proud of it and kept it in immaculate condition.

I worked on the surgical counter for some time and then the opportunity came for promotion and I became Senior on the Toiletries counter. This meant that on occasions I could wear a suit instead of the regulation overall.

Sadly ‘Boots the Chemist’ eventually closed in South Oxhey and is now home to the ‘Peace Hospice’ shop.