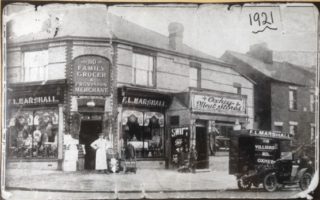 Do you have memories of shopping in Villiers Road?

Arthur Hall says “This shop looks familiar, is it on the corner of Upper Paddock Road, and Villiers Road? If so I can remember it becoming an ironmongers called Crawley’s, Mr Crawley ran the shop with his Wife. They also sold electrical goods, I can remember buying a radio from him in 1950. I was 18 and thought that it took a long time to warm up. The shop would have given ‘Health & Safety’ a headache, as they were allowed to store paraffin in bulk, for dispensing into customers own cans, when you entered the shop you would notice the smell of paraffin, probably due to spillage.The butchers next door existed but I cannot remember the then current name.”