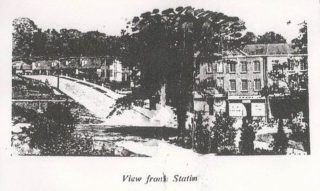 I have found this picture of the bottom end of Carpenders Avenue, taken from the railway bank adjacent to the old Carpenders Park Station. It shows the few houses that followed on from the bungalows towards the shops, and on the left where the bungalows end as well as the footpath, at this point you can see a footpath which runs parallel to the bungalow which ran along the edge of what was a field, this led to a concrete shelter complete with an air raid siren which was built for the A.R.P. during W.W.II.

The field on the left opposite the shops, extended into Penrose Avenue. The bushes in the bottom left hand corner is where a Petrol Station was built. The hedge hides a footpath with a bridge which crossed the Hertsbourne Stream and lead towards the ‘Cattle Tunnel’ and through to oxhey golf course the R.H. Fork took you parallel to the railway and joined Watford Heath.

The reason for sending you this picture is that it completes the Pictures of Carpenders Avenue  which I sent you and can be seen under Carpenders Park St Meryls Estate Topics. I hope that perhaps they may be of interest, and jog memories of those who may remember this area. Regards Arthur Hall