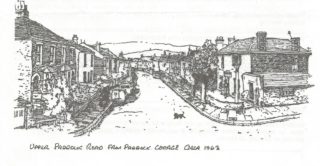 When we moved there was a little alleyway that ran from Upper Paddock Road round to Sherwoods Road – we used to call it the ‘Piggery’ because there was a pigsty in it and one or two pigs. During the war several of the neighbours clubbed together to buy a pig, then had it killed and shared it out. Further down this alleyway, there was a stable – a Rag and Bone man used to keep his pony and car there – a Mr Narroway, who lived in Lower Paddock Road. Now of course this alleyway is called Field End Close.