You are here: Home>Places>Watford Heath - Oxhey>'Grange Cottage' and 'Thoughts of Watford Heath' - Oxhey

By kind permission of his daughter Virginia Barber 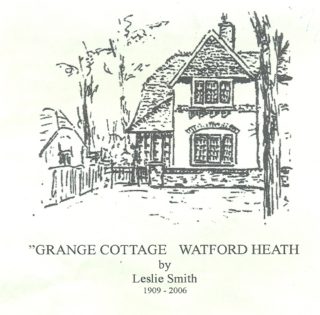 In my very young days I remember Watford Heath as a green area with houses all around it and approached from Watford by a sandy lane.  There were no houses between the Heath and Heath Road; what is now Bucks Avenue was a cart track to Bucks Farm at the top.  The Bucks, Sherwoods, Wilcot and Talbot area was just fields.  Just below where No. 156 Pinner Road is now there was a stile ( now a flight of steps) to a footpath leading to Bushey, St James Churchyard.

On the Heath itself there was a pond at the corner opposite Oxhey Avenue and another one on the little triangular patch of land where the electric transformer stands.  The house between the bungalow and the footpath leading down beside the railway was occupied by a Mr Jefferies who owned the adjacent builders yard and who at one time was Mayor of Watford.  Between the footpath and Royal Oak Pub were four little cottages which were replaced by the present houses about 1920.  The cottage on the other side of the pub, No. 26 was built for the coachman of Oxhey Grange, while No. 27 (where I now live) for the Grange washerwoman. More of that later.

The next house, No. 28 was originally a one-storeyed building for use as a sort of clubhouse for the employees of the Grange, subsequent occupants have gradually added to it.  Nos. 29 and 30 are almost the newest houses on the Heath, having replaced two little cottages in the mid – 1920’s and together with Pinehurst opposite the Load of Hay, were built of materials from the old Cassiobury Mansion when that was pulled down.  No. 29 has had considerable alterations made since it was built.  No. 20 too has had extensive alterations since the present occupant came in the early 1950’s.

No. 34 was our local shop and sold groceries, sweets, cigarettes, etc,etc.  it was called the Rose Tea Garden because it also sold teas in either the small hall attached to the house or in the garden and they catered for club outings, especially the cycling clubs.  The hedges on each side of the garden had topiary work on them.  On one side was cut two – foot high letters T E A S and on the other side a teapot, a cup and saucer, a milk jug and a sugar bowl.  These were always kept neat and tidy by Nelson Baker, the occupant of the premises and a gardener at the Grange.  When old Mr and Mrs Baker died the house was taken over by their son, Roy and he completely gutted the inside and rebuilt it, taking ten years to do it and it became a very beautiful home.

On the north side of the heath there are four terraced cottages (Nos. 1-4) with a detached cottage (No.5) behind them.  The main school was No.4 but No. 3 was also used.  The cookery school was at No.5.

On the opposite corner was Watford Heath Farm.  The small farmhouse, which was next to where No. 172 Pinner Road is now and where one of the blocks of flats stands, is reputed to have been built by gypsies because there was no upper storey which was the gypsy method of building.  On the corner was the road leading in with a five barred gate giving access, while just inside was a barn.  On the grass verge where the telephone box is, there was a water trough for the use of passing horses.  The main traffic down the narrow, tree-lined country Oxhey Lane was horse-drawn vehicles or sheep or cattle going to market.

At one time all the houses on the eastern half of the heath were owned by and rented from the Hon. Doyle Penrose who lived at the Grange.  Every Christmas all the tenants received a sack of logs and a sack of coal from the landlord – no electric or gas fires in those days!

On the island where the bus shelter is there was a rather ornate pink marble drinking fountain with a brass cup attached to it by a chain and at the bottom a basin from which dogs could drink.  It was a memorial to Col. Eley who lived at the Grange before the Penroses.  Unfortunately the Watford Council took it way and destroyed it.

As already stated my house, No.27 was built for the Grange washerwoman; our deeds unfortunately do not say what year it was built but we think it must have been at least 200 years ago.  The washing was done in an outhouse at the back where there was a large copper and the water was pumped up from a well, which is still by the back door.  The ironing and airing were done in a building in the garden which is known as ‘The Barn’.  The large fireplace had a grill over the fire where the irons were heated and along the wall under the windows were hinged tables for the ironing.  When we came here the Barn was in a deplorable state having been used to store coal, logs, garden tools and all sorts of rubbish.  There was no proper floor, just bricks laid on the earth.  We had visions of all the things that could be done with it, so the first thing was to put in a cement floor.  Then a power line was brought over from the house, the ceiling was lined with polystyrene tiles and the walls boarded and papered.  The Barn has been used for a variety of purposes: various youth clubs, Boys’Brigade functions, during the war it was a school for very small children and the Bowls Club had their tea there every Saturday.  Now it is a workroom.

I have lived on the Heath since 1929 in three different houses: No.29 (before we were married) Nos. 26 and 27.  I am very happy here and I hope I shall be able to remain here for my last few years.