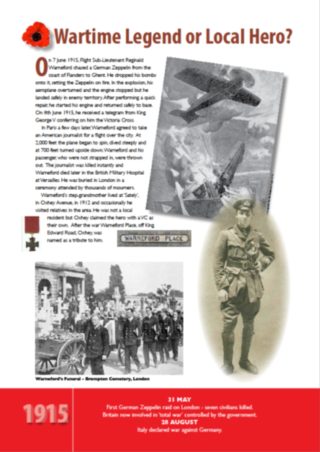 On 7 June 1915, Flight Sub-Lieutenant Reginald Warneford chased a German Zeppelin from the coast of Flanders to Ghent.  He dropped his bombs onto it, setting the Zeppelin on fire.  In the explosion, his aeroplane overturned and the engine stopped but he landed safely in enemy territory.  After performing a quick repair, he started his engine and returned safely to base.  On 8th June 1915, he received a telegram from King George V conferring on him the Victoria Cross.

In Paris a few days later, Warneford agreed to take an American journalist for a flight over the city.  At 2000 feet the plane began to spin, dived steeply and at 700 feet turned upside down.  Warneford and his passenger, who were not strapped in, were thrown out. The journalist was killed instantly and Warneford died later in the British Military Hospital at Versailles.  He was buried in London in a ceremony attended by thousands of mourners.

Warneford’s step-grandmother lived at ‘Sately’, in Oxhey Avenue, in 1912 and occasionally he visited relatives in the area.  He was not a local resident, but Oxhey claimed the hero with a VC as their own.  After the war Warneford Place, off King Edward Road, Oxhey, was named as a tribute to him.