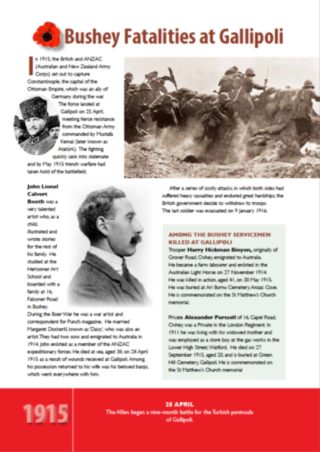 This information relating to Oxhey is extracted from the image.  The full version is in the attached pdf file.

Trooper Binyon, originally of Grover Road, Oxhey, emigrated to Australia. He became a farm labourer and enlisted in the Australian Light Horse on 27 November 1914.  He was killed in action, aged 41, on 30 May 1915. He was buried at Ari Burnu Cemetery, Anzac Cove.  He is commemorated on the St Matthew’s Church memorial.

Private Purssell of 16, Capel Road, Oxhey, was a Private in the London Regiment.  In 1911 he was living with his widowed mother and was employed as a store boy at the gas works in the Lower High Street, Watford.  He died on 27 September 1915, aged 20, and is buried at Green Hill Cemetery, Gallipoli.  He is commemorated on the St Mathew’s Church memorial.