You are here: Home>Events>Events 2013>FAR FROM THE EAST END

FAR FROM THE EAST END

The moving story of an evacuee's survival and search for home 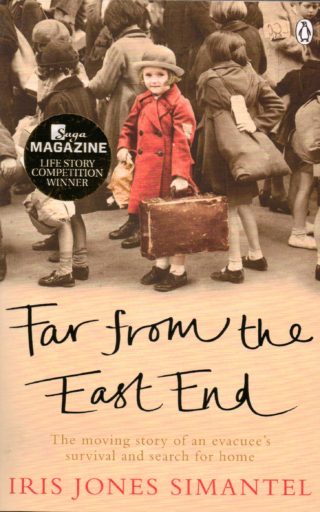 Book Cover - Far from the East End
Permission of Author

Just wanted to share the good news that my book has just been published by Penguin Books. My story is not just that of an evacuee, but also of life after the war when we became some of the first people to move out of London to be resettled on the new South Oxhey Estate. It tells of the hardships suffered as we struggled to adjust to our new lives on a housing estate that still had no roads, schools or shops. It also tells of how unwelcoming the neighbouring townsfolk made us feel.

My story is filled with humour, which balances the sadness and despair experienced. It is also a social history and social commentary of the times when we suffered the effects of the then more prevalent British social class system. Be prepared for what has been called, “a jolly good read” and “a real page turner”. Also be prepared for a few somewhat ribald anecdotes, (yes, I tell it all as it actually happened).

Further good news.  I have just been informed that my book has achieved “best seller” status in The Sunday Times after just three days of sales. And who was it who said, “you council house kids will never make anything of yourselves?”  So many of us proved them wrong!

FAR FROM THE EAST END is available on Amazon in paperback and Kindle editions. It is also available at supermarkets and most book stores. If you receive Saga Magazine, you can order the book at a discount (my book won Saga’s life story competition and there is a wonderful feature article about me and the book in the July issue of the magazine).

If you read the book, and I hope you do, please leave a review on Amazon, I would greatly appreciate that.  Many thanks and happy memories and reading.