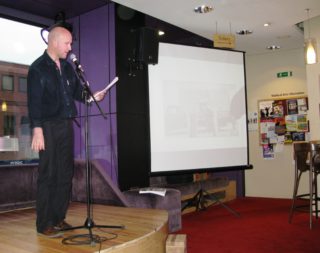 John Schad read extracts from his book “The late Walter Benjamin” at his Literary Estate event at the Palace Theatre on 2nd June 2012.

“The novel centres on one particular tenant who claims to be Walter Benjamin, and only ever uses words written by Benjamin, apparently oblivious that the real Benjamin committed suicide 20 years earlier whilst fleeing the Nazis. Initially set in the sixties, the text slips back to the early years of the estate”

John Schad lived in South Oxhey from 1965 to 1981. He is Professor of Modern Literature at the University of Lancaster.

“The late Walter Benjamin” is published by Continuum

“You are about to encounter a man named Mr O. E. Tal, a man who lived in a place, a kind of settlement called South Oxhey, a place near London that was built after the World War II.  It was, you see, built for bombed out Londoners, working-class Londoners.  Mr Tal though, always claimed that he himself was a man from Berlin; in fact he claimed he was a dead man from Berlin, a very particular dead man, namely, Walter Benjamin, the dead German-Jewish intellectual”