You are here: Home>Topics>Early Memories of South Oxhey>Poor but proud 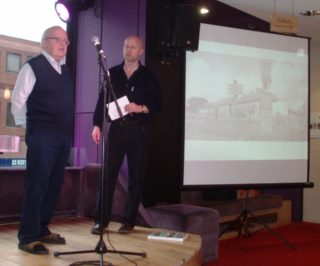 Local historian and author David Reidy was interviewed by John Schad at his Literary Estate event at the Palace Theatre on 2nd June 2012.

David Reidy was born in Sloan Street in London.  in 1948, when he was 2 1/2, he moved to Caldwell Road in South Oxhey.  David had an idyllic childhood, spending a great deal of time out of doors building camps and dens and going birdnesting.

Prisoners of war did some of the ground work for the building of the estate, Italian prisoners started in Brookdene Avenue. Most of the houses were built by 1952, but there were no streets, no shops, no youth or social facilities.  Even so, people could not believe the greenery, and the housing they had come from in London was inferior in comparison.  There was a points system in operation to get one of the houses based on things like your health and the size of your family.  There was a TB scare in the 50s and there was some ill-health in the area, but not a disproportionate amount.

There was a lot of anxiety amongst local residents about Londoners moving in.  A vigilante group was set up to protect the women by people in Carpenders Park.

It was so cold even the loo was frozen

In the winter it was very cold as they had no central heating (even the outside loo was frozen), instead they had pink parafin heaters and hot water bottles.  They could not afford much coal so they went wooding on the railway embankment

An adult education Institute was set up in Hampden School but it closed due to lack of numbers.  The people worked very long hours and this meant that they were very tired, too tired for learning.  The Clitheroe Club also offered education in the 50’s including visiting speakers.

There were no buses to Watford until the 50s.  David can remember walking to the paddling pools in Cassiobury Park because they could not afford the bus fare.  The Golfers Halt train station survived until 1952, it had 2 wooden platforms but a bigger one was needed due to the amount of traffic.

David Reidy’s book “Poor but proud; a history of South Oxhey” is published in June 2012 in collaboration with Three Rivers Museum Trust.