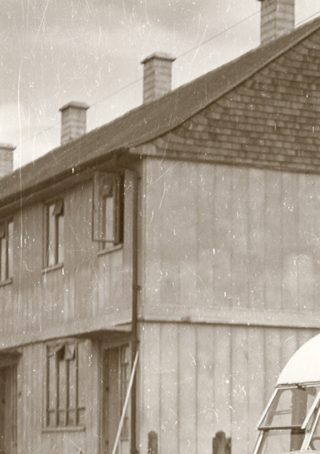 I came to live in Prestwick Road around 1954. About 15 years after I moved to South Oxhey they found the houses were made from pre-cast concrete. All the outside walls had to come down, the doors were still there and they put in temporary windows. All the builders had to build the houses back up with bricks. We had to pay for the re-building, and we hadn’t long bought the house.

It took about two or three months for the builders to complete the re-building. Some people moved out but we stayed with poles holding up the ceiling, the place was so dirty from the dust.  After the houses were finished we got a proper porch and the house was much better and warmer to live in.

When my mother first moved here there were no shops and there used to be vans which came round or she had to walk to Watford for her shopping. By the time I moved in the shops were built.