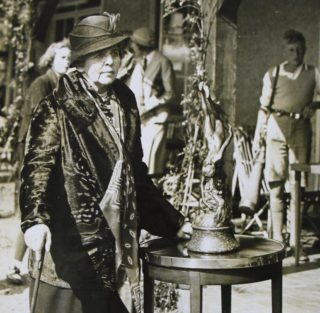 FOURTH ANNUAL GENERAL MEETING of the members of the Oxhey Golf Club held at the Club House on Saturday 20th May 1916 at 5.30 pm.

The Secretary read his report as follows: “There is not much to report, and I am afraid the little there is not very interesting from a golfer’s point of view as, owing to the war, matches have been in abeyance generally and the few competitions that have been held have received very little support.

The following explains this: there were 13 bogey competitions and only an average of five entries per competition, and 13 medal competitions with an average of three entries per competition. The Captain’s prize was not played for in 1915, the members who had qualified for the last two year playing for Mr. H. M. Orr’s prize in April last. The prize was won by Mr. G. P. Biggs with a net score of 167 for the 36 holes medal round. It is perhaps as well that I, as a responsible factor, say but little about the course. But you all know what it is and our difficulties of labour etc. On the whole I think those who know other courses inland will give it a favourable comparison. I personally have to thank the members for their kindness and consideration when dealing with the Club in their requirements and criticisms, both inside and outside the Club.

As far as I can ascertain we have some 78 members on service. 52 members have resigned since the last annual meeting. 34 members have joined since that date and there are 13 awaiting election now. The Club entrance fee for men members has been waived, and the green fee made 2/6d throughout the 7 days of the week. The number of grounds-men and permanent caddies on service is 31. Of these as far as I know there are five casualties: 1 killed, 2 wounded, 1 missing, I died. Of the members on active service I have only heard of 9 casualties: 3 killed, 5 wounded, 1 prisoner. If any members know of more, or of any member left out of the list on the notice board, I shall be glad to know. The list might be useful hereafter if it is thought right to put up a permanent record in the Club House”.   Mr. Sedgwick proposed and Mr. Melhuish seconded that the Secretary’s report be adopted. Carried unanimously.   Mr. Murray Hill proposed and Mr. Sedgwick seconded a vote of thanks to the Chairman, which was carried unanimously, and the proceedings then terminated.

FIFTH ANNUAL GENERAL MEETING of the Members of the Oxhey Golf Club held at the Club House on Saturday 19th May 1917 at 5 pm.

Mr. H. Fisher-Smith in the Chair.   The Secretary having read the notice convening the meeting, Mr. Fisher-Smith said that in the absence of Mr. S. J. Blackwell, which all regretted, he would be in the Chair, but as his name was up for re-election he would vacate the chair before the election.   Mr. L.W. Sedgwick proposed and Mr. R. A. Blackwell seconded that Mr. Fisher Smith be re-elected as Captain of the Club. This was carried unanimously.   Mr. Fisher Smith resumed the chair & returning said “I must thank you all very much for re-electing me Captain. I am very pleased to state that the Committee has worked in great harmony with the Directors, and hope it will be the same during the coming year. We regret very much the death of our colleague , Mr. Harford (?) and we have sent our condolences to his widow. Mr. R. N. Balfour has retired from the Committee, being on active service and to fill these vacancies it is proposed to elect Mr. S. J. Attenborough and Mr. J. R. Sharman. I have much pleasure in nominating these gentlemen”.   Mr. H. F. Eve seconded and they were unanimously elected.

The Secretary then read his report as follow: “There is even less to report than in the previous years before the war. There are now some 84 members now serving in the Navy, and army. As far as I have been able to ascertain eight members have been killed, thirty have resigned membership and 47 have joined the Club since the last Annual Meeting. One of the old groundsmen has been killed and another is a prisoner of war. We now have two of the old hands and four boys on the course, with the sheep to help them in some ways, though not in others, for the bunkers suffer from the play of the lambs and both sheep and lambs drink the water from the water boxes at the tees. The fire in the caddie master’s and professional’s shed is regrettable just at this trying time, but I am glad to say we have managed to very nearly complete the rebuilding and it should be available for use within a month from this date. The sharp winter has done the course much good and the frost having gone deep. I anticipate there will be better drainage, and we shall not have a recurrence of last year’s mud trouble, for which the cinders were put down. We had practically three years without frost and two years exceptionally wet. Last year three stacks of hay were obtained, but this year owing to the sheep I do not anticipate getting any in. The Murray Hill Cup and the Founder’s Cup have owing to the war and the absence of so many members not been played for, and bogey and medal competitions have also been in abeyance, but the present Captain very kindly gave a cup to be played for by available members in match play singles during last October and November, and this was won by Mr. P. L. Riviere.

The Railway Company has been asked to “give some better trains for Sunday afternoon, and also to open the halt on  Sundays”, but without success. I am afraid golf clubs can expect very little consideration from the railway authorities during war time, and we shall have to wait for the re-opening of the halt, but the new electric service has been very useful and will, of course, be excellent later.

The thanks of the Committee are due to members, for we have received few or no complaints as to the state of the course, notwithstanding the enhanced rate of labour, food, wines etc. and consequent difficulties. They are in hopes we shall yet pull through with the assistance given all round, and the course will show up well later with other clubs in the neighbourhood of London”.   The report was adopted.   Mr. H. H. Lyde proposed a vote of thanks to the Chairman, seconded by Mr. Dyball. Carried unanimously.    The proceedings then terminated.

Note: Now that the history of Oxhey Golf Club is well under way, and to spare the reader having to plough through procedural and possibly mundane material, it is proposed to confine transcription only to items of general interest to reflect the development of the Club.

SIXTH ANNUAL GENERAL MEETING – 25th May 1918   ‘Service’ members were required to pay a subscription reduced by half, which resulted in resignations during the year of only 8.   Efforts to improve the railway Sunday service met with no success.   Reference made to the difficulties of maintaining the Club in the current financial climate.