Start of the Second World war until closure in 1946 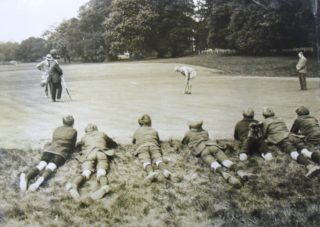 Reported that Mr. T.A.W. Blackwell was now the sole owner of the Club and that the lease had until September 1942 to run. Efforts to negotiate an extension to the lease had, so far, been un-successful due to “conditions at the present time”.

There had been a fall off in membership due to members wishing to curtail expenditure “in the present conditions”.

Mention made of “economies” but, notwithstanding the war, the course being in “excellent condition”.

A presentation was made to Edward (Ted) Ray on the occasion of his retirement after serving as the Club professional for 28 years. His record included:- Open Champion 1912 (second 1913 and 1925, third 1908 and 1920) Played for England in International Matches 9 times, American Champion 1920 (and tied in 1913 with Vardon and Ouimet and lost on the replay, Hertfordshire Champion 9 times, and won the Daily Mail Tournament in 1923.

The Club is a limited company – The Oxhey Golf Club Ltd, share capital being £1500 in shares and £16200 in debentures. T.A.W.Blackwell is the owner of the land, having granted a lease to the Company due to expire in September 1942. TAWB owns the debentures and is virtually the owner of all the share capital. He is President of the Club and Chairman of the Board of Directors.

The meeting was being brought about as TAWB was of the opinion that the Club was likely to lose more money in the future and he had no wish for houses to be built on the course. He wanted to keep the Club going as he considered it “an amenity to his house”.  For greater tax efficiency it was proposed that the Company would surrender the lease (one year to go) and for TAWB to take the place, in effect, of the Board of Directors as owner of the Club. In this way 75% of any loss could be “passed on to the government”.

This followed the death, on active service, of R.A.W. Blackwell, whilst serving with the Royal Artillery – 5th July 1942. H.W.Dallas (in the Chair) the meeting “to decide whether the Club shall exist after 1st May” (1944) The hope was expressed that, ultimately, a favourable outcome could be arranged with the executors for the continuance of a lease.

A member of the Committee “had to resign, owing to the petrol restrictions”.

Reported that, during the year, an application had been received from the Oxhey A.R.P. for the use at night of the Ladies Room for the Mobile Ambulance Unit.   The meeting was overshadowed by proposals from the L.C.C. (LondonCounty Council)  It was recommended that a “wait and watching attitude” be adopted rather than incurring considerable costs in making representations at this stage. Other important local interests would be lodging protests with the Ministry of Health.

Confirmation of the L.C.C. Compulsory Purchase Order by the Ministry of Health, which would enable acquisition of the Oxhey Estate as and when it was required. It was hoped that this would not necessarily involve building on the course and therefore the executors of R.A.W.Blackwell would agree to continuance of the existing arrangements temporarily.

A member drew attention to the difficulties of the head green-keeper – “It must have been heartbreaking not to be able to get worm-killer or dressing, or anything to counteract the effect of sheep on the course”.

This highlighted scarcity of labour, rationing causing formidable catering problems, and the state of uncertainty caused by the L.C.C.   The Committee felt that matters should go forward on the assumption that the Club would continue.   The executors of R.A.W.Blackwell had agreed to continue existing arrangements for a further year.

Reported that the L.C.C. wished to dump hardcore between the railway and the 14th Fairway. The position was that the L.C.C. had elected to acquire the land , and their powers under the Housing Act were such that they could do whatever they liked.

L.C.C. intended to start making a road on the north east boundary of the course, which would mean the loss of the 13th green and 14th and 15th holes. Some L.C.C. officials had indicated a wish that the Club should “stay on for a bit”. It was stressed that nothing could be done by the members unless a lease of at least 15 years could be obtained. It was agreed that, “Unless the L.C.C. could give the Club some information soon it would have to close down, as it would be useless to carry on”.

A letter dated 2nd September from the L.C.C. was read wherein it was stated that the road along the eastern boundary could not be re-sited, and that certain land, coloured pink and hatched red on an accompanying plan, would be required within the next week. The letter also stated that other land, coloured pink, would be required by 1st November.   Letter from Herts War Agricultural Committee notifying that the Club would be  asked to allow sheep to graze the course during the 1947 grazing season. An appeal would be considered.

MINUTES OF A SPECIAL MEETING OF THE COMMITTEE – 21st September 1946

In the absence of being able to obtain a lease from Herts. County Council it was agreed to propose to an Extraordinary General Meeting that the Club should be closed down on 31st October 1946.