You are here: Home>Topics>Local Bands>Eddie Falcon and the Four Notes

Eddie Falcon and the Four Notes

South Oxhey group from the sixties. 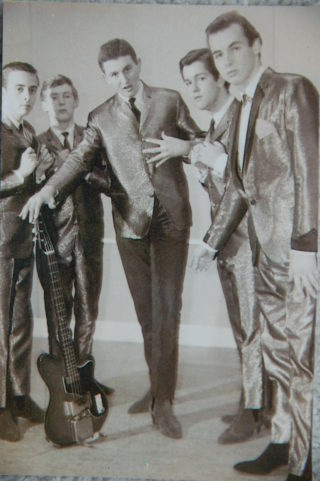 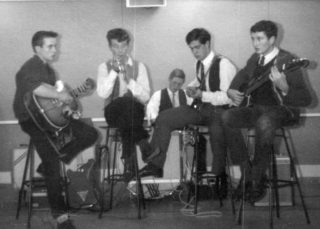 Back in the early sixties I played in a South Oxhey group called Eddie Falcon and the Four Notes comprising me Mike Simpson on drums, Derek Cole on lead guitar, Ken Fordham on rhythm guitar, Rob Westwood on base and Eddie Ayres lead vocalist , with Kens brother John as manager/roady. Prior to this the group played under the name of Lee Davis and the Reverbs with Garry Davis as singer, before he moved to Ipswich and musical fame as a founder member of Geno Washington and the Ram Jam Band.

As part time musicians (we didn’t give up the day jobs!) we played most of the youth clubs in Watford and the surrounding areas, with gigs at Londons County Hall with the Mojos and the Flamingo Club with Georgie Fame and the Blueflames being our nearest claim to fame (excuse the pun). Oh, and an article on the ‘Up and Coming Group’ in the Boyfriend Magazine the publishing of which cost us the equivalent of two weeks wages to the middle man!!

John would collect me from Carpenders Park Station, on my way home from work at Kodak HQ in London, in the trusty Commer van before whisking us away to the venue for our gig. Midnight plus would see us in the Busy Bee on the A41 for a late lunch/early breakfast before home and a few hours sleep as the cycle started again. Our guitarist Ken was a tailor and made all our ‘green lurex’ suites (yes really!) while Cuban healed boots came courtesy of Annello and Davide in London.

Does anyone out there remember seeing us play? If so I’d love to share those memories with you.
Mike (the mod) Simpson

While looking through some old albums recently I came across a photo of the original group when it played under the name of Lee Davis and the Reverbs – as referred to above.