Concert at the Palace Theatre 2011 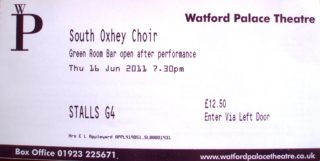 On 16th June 2011, the South Oxhey Choir held their summer concert at the Palace Theatre in Watford.  The Choir looked very impressive in their black and purple, and the audience were not disappointed when they started to sing. The concert got off to a great start with the jazz classic Ain’t misbehaving.

The programme of music meant that there was something for everyone to enjoy from Bruckner to the Beatles.  Some lovely classics such as Bruckner’s Locus Iste, Mozart’s Ave Verum and 5 movements from Vivaldi’s Gloria, were by no means easy choices for the choir to tackle.

There were also some popular treats such as Walking on sunshine, and a fantastic Elvis number, but my personal favourite was the rendition of Don’t look back in anger, which filled the space with the most fantastic sound.

The standard of the solos was extremely high, and the choir are obviously very proud of those who are brave enough to step forward.  The choir also have a lot to be proud of, the most amazing thing being that the pieces are all committed to memory and sung without music.  This means that every member of the choir is watching the conductor, an enviable quality in a choir!

The evening ended with a moving rendition of White cliffs of Dover, to mark the sad passing of one of the choir members Kitty Lee.

Do you sing with South Oxhey Choir or did you go to the concert?  Tell us what you thought.