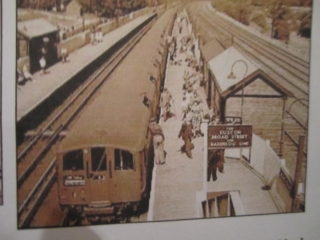 This picture of Carpenders Park station, prior to it being rebuilt as an Island Platform, though not very good, is interesting as, it shows how times have changed. The platform and Ticket Office/Waiting room were built of wood. There was no Barrier to control entry or exit to the platforms, and no ticket inspectors box. The duty porter’s job was to collect tickets from passengers leaving the train, change the destination sign for the following train, and keep the station tidy. The waiting room had fixed wooden seats, and the walls were covered with railway posters, it was always warm and cosy during the winter with its coal fire, there was always plenty of coal, as the Porter collected it from the railway track, having fallen from loaded locomotive tenders, and lying there like ‘Windfalls’ in an orchard.I hope that this picture will stir the memories of those who used this station prior to its rebuilt new position.