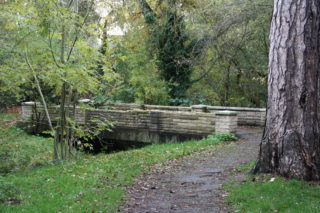 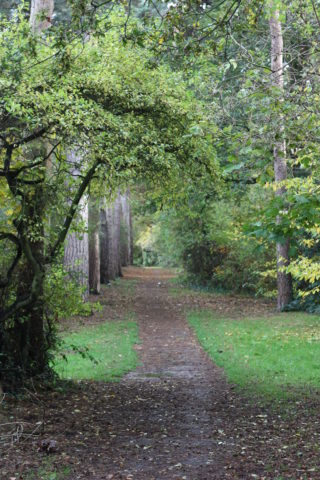 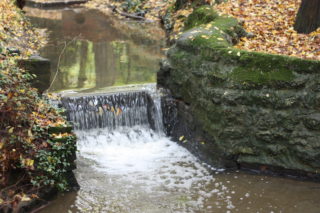 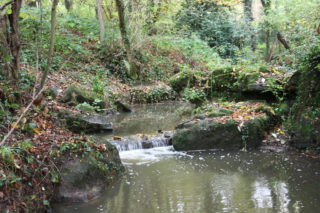 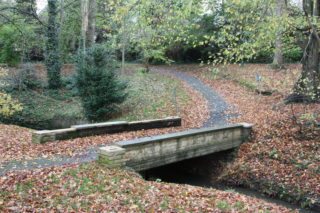 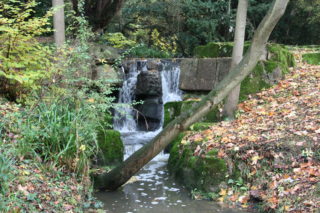 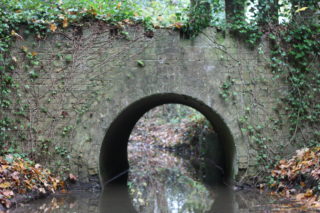 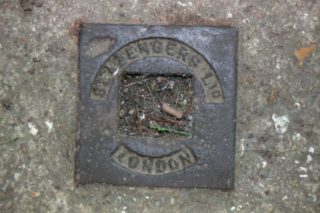 Well, I finally got back across to Carpenders Park for a walk through the cemetery grounds. I parked in the car park next to the Partridge pub and entered via the alleyway opposite.  Only a few yards in is the first bridge across the Hartsbourne stream – looking a bit worse for wear with coping stones missing. The stream was still fairly shallow and free flowing.  Floods in the area are a thing of the past since the flood alleviation dam was built in Oxhey Lane in the 1990’s.  Before it was built the stream would regularly overflow, flooding nearby Delta Gain.

Then came a nice straight walk through the pine trees – planted back in Victorian times probably by the landowner Robert Carew. There are some much older oak trees growing on the riverbank.  I didnt see another soul for the first 30 minutes and managed to see two Kingfishers which darted off their perches and shot along the course of the stream.

Along the back of Harrow Way and Romilly Drive the stream meanders more and the banks are steeper and culverts and the remains of sluices are visible – the culverts probably date from the date of the  development of the housing estate. The sluices and other stone constructions  on the river bed again,  probably date back to the Carews or earlier. Robert Carew purchased the estate in 1862.

Finally, round a few twists and turns and I reached the Cemetery car park, crossing the second bridge in order to do so.  A few yards away is the old fishpond and waterfall. This and other imitation stone constructions in evidence along the stream are believed to have been built by James Pulham and sons – eminent landscape gardeners of the 19th and early 20th centuries. They were noted for their construction of rock gardens, follies and grottoes.

Back over the last bridge and back alongside the stream on the housing side with the stream to my right.  This stretch is bordered by enormous Wellingtonia trees with their thick, spongy bark-many have quite deep holes drilled in them presumably by one of the many woodpeckers heard hammering away on the trees all afternoon. The undergrowth on the banks of the stream is very dense here.

After a couple of hundred yards the stream becomes visible again and more stone constructions become visible again – one has a faint date of 185? carved into it – pre-Carew days, so the stream seems to have been landscaped by earlier owners.  On the left is a concrete area now surrounded by earth embankments and almost entirely covered in earth -the excess from graves following interments – this is the site of the old Victorian  tennis courts-now many years since they saw their last match maybe between upper class gals from nearby Highfield school or officers from Highfield whilst  the house and grounds were requisitioned during WW2. Many years back following one of the floods, I found a .303 cartridge case on the stream bed – from a soldier based at Highfield or a dogfighting aircraft overflying Carpenders Park?

Just into the woods from here, a large tree fell as result of a storm back on the 1980’s, unearthing a huge quantity of broken china and crockery all dating to Victorian times. I presume the tree was planted after the crockery was dumped – again more evidence of old Carpenders Park residents.

A short distance further on and crossing the stream is the remains of an ornamental bridge – vandalised in the early 1990’s its in a sorry state. The old hinges for its gate still remain. This was the carriage drive from Oxhey Lane to the mansion and ran along the route of nearby Hangar Ruding on the other side of the spiked security fence. At this point I disturbed dozens of crows in the nearby trees – they flew, wheeling around the treetops all cawing their heads off at me – quite eerie really as I still hadn’t come across another soul that afternoon

Anyway, across the bridge, left onto the cemetery road and down to the entrance gates. Here on the left is a small open grass area, this was the site of a small three roomed lodge demolished during the course of the construction of the cemetery.  There was a white concrete manhole cover set into the ground which I couldn’t find -perhaps now overgrown and beneath the surrounding undergrowth.

This is the entrance to an underground water storage tank used by the occupants of the lodge. The late Roy Brazier remembered taking water to the lodge in a horse drawn tank as a boy. Further into the undergrowth used to be evidence of more drains and brick construction – now all out of sight and overgrown.

On the other side of the drive, in the undergrowth is a few yards of the old wrought iron three bar farm fencing – there would have been miles of the fencing surrounding the old estate grounds.

The land now in use by the cemetery can be seen on old maps of the area and labelled as the woodwalks – this would have been the landscaped, ornamental walk enjoyed by the rich families living on and visiting the estate. Much of the land in use by the main part of the cemetery and surrounding area was in use as farmland and miles of clay land drains were dug up during the course of grave digging.

It was getting dark by now so back to The Mead and home. A lovely quiet walk but not for the faint hearted on a dark, gloomy November afternoon!