Fatalities at the Somme 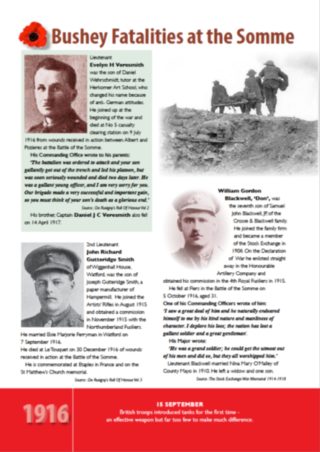 Fatalities at the Somme
Bushey Museum

was the seventh son of Samuel John Blackwell, JP, of the Crosse & Blackwell family. He joined the family firm and became a member of the Stock Exchange in 1908. On the Declaration of War he enlisted straight away in the Honourable Artillery Company and obtained his commission in the 4th Royal Fusiliers in 1915.

One of his Commanding Officers wrote of him:

‘I saw a great deal of him and he naturally endeared himself to me by his kind nature and manliness of character. I deplore his loss; the nation has lost a gallant soldier and a great gentleman.’

‘He was a grand soldier; he could get the utmost out of his men and did so, but they all worshipped him.’

Lieutenant Blackwell married Nina Mary O’Malley of County Mayo in 1910. He left a widow and one son.