You are here: Home>Topics>Sport>West Herts Cup 1965 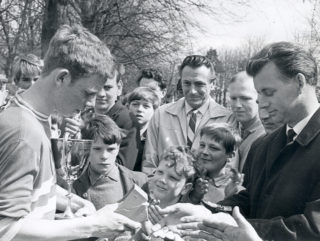 Fans look on admiringly as a young footballer holds the West Herts Cup and his winners’ medal.

Though the game was South Oxhey vs. Woodside, and it looks like South Oxhey won from this photo, we aren’t certain, so if you know the result – perhaps you played in or watched the match – please write a comment below.