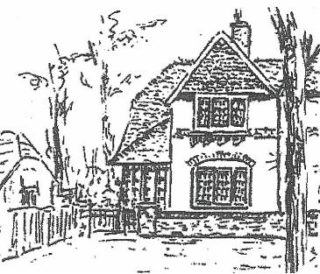 We think the house was built at least 200 years ago although, unfortunately, there is not mention of the “date of birth” in the deeds. It was built for the washerwoman of Oxhey Grange (the big house, just down Oxhey Lane, now obscured by houses having been built all around it). The washing was done in the outhouse at the back, now used as a small studio, and the ironing and airing in the building in the garden, which is known as “The Barn”.

The water for washing was pumped from a well just outside the back door and is covered by a slab which can be seen, partly covered by the back door step.  As far as is known, the well is still full of water.

When we arrived here (1951) the Barn had been in use as a store for coal, logs, garden tools and general rubbish.  It was half covered with Virginia creeper, which was growing through the tiles and hanging down in long, filthy streamers almost to the floor, which was just earth.  The first thing we did was to put in a concrete floor, and then line the walls and underside of the roof with hardboard.  A power line was also laid on from the house.

There was a huge fireplace (hence the big chimney) with an iron grille over it where the irons were heated.  All down one side, under the windows, were tables hinged to the wall where the ironing was done.

The Barn has been used for all sorts of purposes.  During the war it was a school for very small children, and then it was a youth club for bigger children.  Then even bigger “children” used it when it became the “Over – 18 Club” It used to get packed pretty tight with boys and girls – young men and women!  But 20 or 30 years ago they were all very well behaved.  There were a number of marriages resulting from meetings there!  Now it is used as a workroom.

The garden has changed somewhat.  Where the large lawn is, was flower beds and trees, with crowds of laurels out at the back, very few of which remain.  Children find the garden attractive as a place for hide and seek.  Adults find it attractive as a fairly peaceful spot.