You are here: Home>Topics>Trains>Carpenders Park Station

Watford Junction to Euston train circa 1925 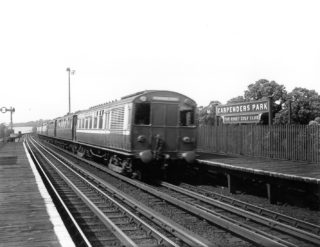 Watford Junction to Euston train circa 1925
courtesy of the National Railway Museum - York, imag.e No. 1691/85

The photo is of a Watford Junction to Euston train circa 1925. It consists of two “Oerlikon” 3 car sets, two of the cars are painted London Midland & Scottish Railway maroon (crimson lake) while the remaining four are still in their original livery of London and North Western Railway “plum and spilt milk”. As the L&NWR was absorbed into the LMS in 1923 the date of 1925 should be reasonably accurate. The DC “new” line was built during the first world war by the L&NWR from Watford Junction to Euston.

Photo courtesy of the National Railway Museum – York, image No. 1691/85

One of these sets is preserved at the National Railway Museum, painted maroon. The destination board is changed frequently to show:- Watford Junction, Euston, Croxley Green.

I remember travelling in them in the fifties, wonderfully smooth and quiet thanks to their heavy ashfelt floors. The trips to Euston were to see family still living in Shepherds Bush or simply to watch steam trains………