You are here: Home>Places>Deed Relating to Raglan Gardens

Development from farmland to housing 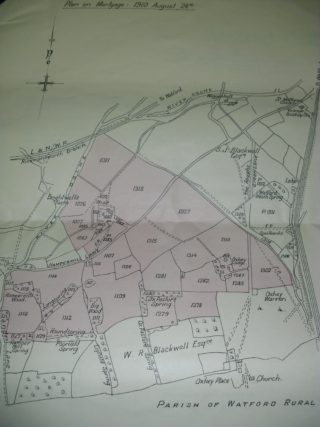 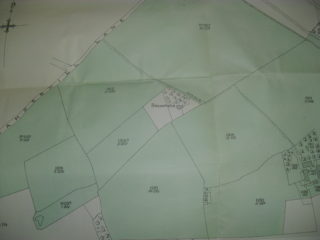 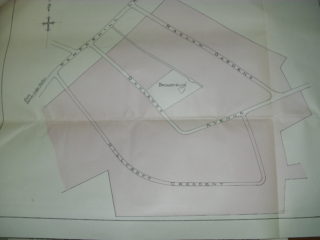 This deed is described on the title page as an abstract of the Title of David John Davies (corrected by hand from Oxhey Builders Limited) to freehold land situate at Hillcroft Crescent, Oxhey, Watford in the County of Hertford.  The document is dated 1932 (corrected by hand from 1934, although parts of the document relate to 1933).  The main thrust of the document, however, seems to chronicle the land being developed in 1933 as Raglan Gardens from ownership by the Blackwell family, through ownership by Mr Davies to Oxhey Builders, up to their development plans.

The document begins with a 6 inches to the mile map, headed “Plan on Mortgage: 1910 August 24th” (first imge).

A mortgage was made on 24th August 1910 between 1) Samuel John Blackwell of Brookshill, Harrow Weald, Middlesex, Esquire J.P. and 2) Thomas John Pitfield of Petworth, Sussex and John Symonds Vidler of Rye, Sussex, “Reciting seisin of said S. J. Blackwell in fee simple and agreement for loan of £6,000.

In layman’s terms, this simply means that Mr Blackwell took out a mortgage of £6,000 from Messrs Pitfield and Vidler for the named property.  This had already been in his possession for over 30 years, so he may have needed to raise money.

The property is described as Oxhey Lodge Farm, Oxhey Hall Farm, Broadfield and part of Oxhey Bridge Farm.  A schedule of plots with usage and acreage is included.  Total acreage is given as 404 acres, 2 roods and 29 perches.

On 23rd August 1910, John Weall of Watford, a land agent, confirmed that the property had originally been purchased in 1977 by Thomas Blackwell.  On his death in 1879, it passed to his son, Samuel John Blackwood, who had been in possession since then.

On 24th October 1911, Messrs Pitfield and Vidler confirmed that Mr Blackwell had previously repaid all the interest due, and that he had now repaid the principal sum of £6,000.  The mortgage was now repaid.

On 9th August 1913, Mr Blackwell (whose address is now given as The Manor House, Chipperfield, Herts) took out another mortgage on the same properies with John Whetham Boddam Whetham of Folkestone, Kent, Sir James Kenneth Douglas Mackenzie of Scatwell, Thomas John Pitfield of Bournemouth, and John Skelton Downes of London, for a sum of £5,000.

On this occasion, the schedule specifies the tenants of the various properties, who are Reginald Dickins, Herts County Council, Mr H. E. Wiggs, The Oxhey Golf Club Ltd. And Colonel Button.

On 31st December 1914, the mortgage was transferred from the group above to Mr Boddam-Whetham (here hyphenated, though it wasn’t before), Mr Downes, William Edwards of London, and Northwood Rawlins of London, with the note that the £5,000 plus interest now belonged jointly to the new group (the Transferees).

On 18th March 1918, Mr Boddam-Whetham died, and was replace in the group of mortgagees on 26th November 1918 by Walter Hayes-Sadler of Thurnham, Kent.  On 9th June 1920, it was recorded that all outstanding money owed on the mortage had been repaid, and the property reverted to Mr Blackwell.

Another map follows, headed “Plan on Indenture: 1924 October 3rd”.  This is much larger scale and only includes part of the land covered on the first map (second image).

On 22nd December 1919, Mr Blackwell made a will appointing his sons, Richard Giraud Blackwell, Francis Samuel Blackwell, Thomas Charles Blackwell and Robert Arthur Blackwell, as executors and trustees.  Codicils were made on 27th March 1920 and 28th September 1922, without affecting the disposal of this property.  Mr Blackwell died on 26th January 1923, and the will was approved on 24th March 1923.

On 3rd October 1924, the brothers sold part of the property to David John Davies of Wembley, Middlesex, for £12,500.  This included Oxhey Lodge Farm and parts of Oxhey Bridge Farm and Oxhey Hall Farm, a total of 134.125 acres.  This appears to be the area marked on the second map.  It excludes Broadfield, whose owner is guaranteed right of way to Hampermill Lane, and a number of stipulations are made concerning use of the land, including types of building and other land-use permitted.  A schedule of the lands included is given.  A verification is given, dated 9th September 1924, of the payment of estate duty following Mr Blackwell’s death.

On 30th July 1932, Mr Davies applied for the restrictions specified in the sale to be modified to the extent of allowing development of semi-detached houses to be built.  This was allowed for part of the land involved, though not for all.  A map headed “Plan on Conveyance: 1933 October 5th” appears to be connected with this application, and refers to the development of Raglan Gardens (third image).

On the same date as the map, the land highlighted was sold by Mr Davies to Oxhey Builders Limited of Watford.  Again, many restrictions are made on the land-use, including where and what kind of buildings are permitted (“semi-detached or detached dwelling houses and outbuildings connected therewith”) and rights of access for the owner of Broadfield.

On the same date, Oxhey Builders took out a mortgage with the Norwich District Provident Permanent Benefit Building Society for £6,300 to develop the land into a “Building Estate”.  The terms of the mortgage specify that, unless the mortgage is redeemed, the building society will be entitled to hold all the premises for the term of 3,000 years – in other words, they’d lose their rights to the land on 5th October 4933 AD.

On an unspecified date (given merely as 193 .) it was recorded that Oxhey Builders had repaid the sum (also left blank) and all rights to the property had reverted to them.  It’s specified that this relates to “a new road called or intended to be known as Raglan Gardens” and guarantees right of way on Raglan Gardens and the “private road” to the south-west.

Finally, on another date given only as “193 .” another mortgage was taken out by Oxhey Builders with the same building society, this time with the company’s directors standing as Surety.  The amount borrowed and due to be repaid was also left blank on the document.