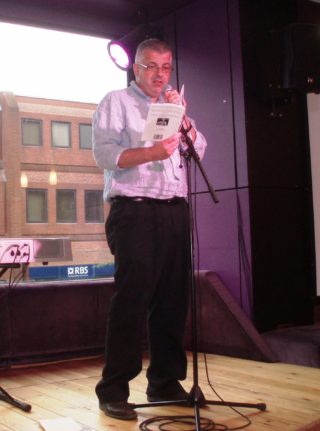 Michael Crowley read poems from his book “Close to home” at the Literary Estate event organised by John Schad at the Palace Theatre on 2nd June 2012.

Michael is a poet and playwright and grew up in South Oxhey.  He used to spend a lot of time in Oxhey library as a child. His poems are reminiscences of his childhood.

It was an overspill, tipped into fields after the War. We played in woods held chalk-white warm eggs, frogspawn and newts caught in the tracks left by the diggers.

We lived in white semis and grew detached between the one way system and the end of the line. Some of us knew the names of trees some all the stops to Euston.

Nobody knew the fields better than me – the hour and a half of copse and grass the dell deep enough to abseil down bright red lines on my palms from the washing line.

Coaches came to take our parents to work along asphalt like liquorice. We spoke of where our families came from we made our voices belong.

My mother spoke about going home. Still there were always the fields, always a song In the summer time when the weather was high there were Germans to fight, places to hide

and her, standing at the edge of the path calling me in before the other boys. There was no adventure for the Famous One. We moved on. It became itself after we’d gone.