You are here: Home>Topics>Early Memories of South Oxhey>Shops and mud 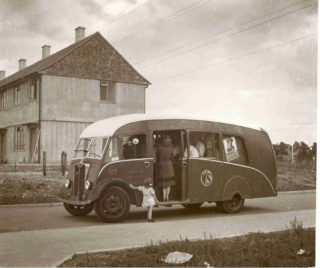 Moving out of London

London was nearly bombed out y’know, so we thought oh we’d move out to, Dad said “let’s move out to a new estate”, so we came out here, but right half of London where we were, half of it was all flattened y’know.

[So I suppose it was a nice relief to get to this beautiful new estate?]  Yeah, well it wasn’t a beautiful estate then, it was all mud and muck, there was hardly anything on here, there was no shops [oh right], we used to have coaches come round and you used to buy stuff off the coach, or a horse and cart used to come with the milk, y’know, so we used to have that.  There was no shops until they started rebuilding the shops here. [So how long was that going on?]  Oh I can’t remember that far away, it was a while back [a few years then], yeah a few years, yeah a few years, as I say we used to have the coach come round and buy it off the coach.  You used to get on one end of the coach, walk right through, get what you want and pay at the other end. [If you wanted any other shopping would you go anywhere else?]  Yeah we’d go to Watford, Watford’s OK, we used to go to Watford.  There used to be 6 cinemas in Watford.