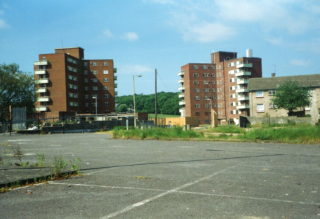 These were eight story blocks of flats in Lincoln Drive opposite St Joseph’s School. They took a good while to demolish. They started with an old fashioned ball and crane which they thought would make light work of it, but the balcony’s down each side were more reinforced than was originally thought so the job took a lot longer.

There used to be a great view of the estate from the roof of Corbett House.

They weren’t the best looking of buildings but served their purpose and housed many families over the years.