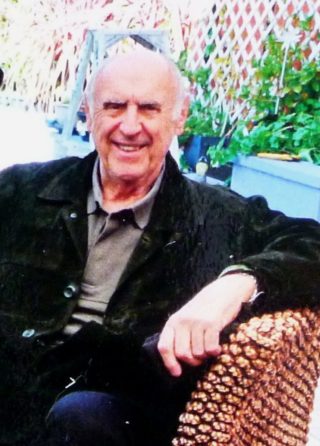 Those ex pupils of Clarendon School who are familiar with the website may have read the various comments from ex pupil Geoff Sweetland.  Geoff sadly died  in Australia on 9th February 2017.  His funeral was attended by Len Kerswill a long term friend of Geoff and also an ex pupil of Clarendon School. The following was written by Len and contributed to “Our Oxhey” in memory of Geoff.

Geoff  Sweetland, a larger than life character, grew up on the estate in the late 1950’s and early 60’s. He attended Little Furze Junior School followed by Clarendon Secondary School. In the later years whilst still at school Geoff helped his father Jim distributing the local evening newspaper.These were collected from the platform at Carpenders Park Station after arriving on the London train Geoff would often be seen diving from a bright orange van with bundles of the Evening News distrubuting them to shops and newspaper venders. He would also be seen, on Saturday nights selling bags of peanuts outside Watford FC at the Greyhound Racing meetings..

Eventually, Geoff got tired of being paid peanuts and began an apprenticeship as a carpenter on the two tower blocks of flats on the Meriden Estate, in North Watford.

To supplement his income Geoff became a bouncer at the California Ballroom in Dunstable. Dressed in his smart suit, white shirt and bow tie he caught the eye of a certain young lady, Lynda Driver. Going all out to impress her Geoff changed his title from ‘bouncer’ to ‘steward’. His position put him in close contact with all the performing celebrities. These included The Hollies, Stevie Wonder, Tom Jones, The Kinks to name a few.

In 1970 Geoff joined the Bedfordshire police force and married Lynda..

But in 1982 they decided to emigrate to Australia as they  wanted a better life for their two two children, Paul and Kelly. They settled near Sydney running several successful businesses

Geoff died in hospital, two years after being diagnosed with a terminal lung disease but he was determined to reach his 70th birthday and this goal he achieved dying four days after.

Geoff was a life long supporter of West Ham United. At his funeral service attended by over 140 friends each was given soap bubbles and was asked to blow as the song ‘I’m forever blowing bubbles’ the West Ham anthem was played,

Geoff was very proud of his South Oxhey roots and felt his background gave him the determination to succeed in life.